One of my favourite bloggers, Amy S, is dead.

Amy wrote well, had a quirky, occasionally dark sense of humour, posted amazing volumes of information (reading about her life, I think she must have got very little sleep!) and had that rare trifecta: she loved cricket, had some idea of what she was talking about *and* she could write about it. From discussions in comments and the odd email exchange, she also followed AFL and had a keen interest in politics, which is where she ended up working.

A smart, funny, sports-loving woman working in our government; I wonder what she would have done.
Update from missjane at 11:09 pm No comments:

Late night post: a review of A Little Night Music.

I won't talk about cricket much right now, although at some point I would like to. I can at least say I was at Lord's for an historic match. It's unfortunate that it was English history and not Australian history. Three matches to go, though, so all is not lost, just a 75 year old record. And I did have a lot of fun, just not as much as I would've if we'd won.

As part of my recovery, I went to see "A Little Night Music" in Leicester Square.

I had mixed up the nights and turned up a night early, and not only did the theatre staff find me a seat, it was better than the one I had booked. One of the pluses of travelling alone is that you are easier to seat at short notice.

A Little Night Music (ALNM) is a Sondheim musical, so it has beautiful music, (all in waltz time, and several pieces are waltzes) a plot, dialogue and lyrics which are clever, funny, sharp, cynical and touching; sometimes all at once. At first I thought it might in fact be a little too cynical and sharp for someone wandering the world on her own, thinking about the meaning of life and having just seen her team lose the cricket. But then again, I like Sondheim precisely because his musicals aren't necessarily light and bubbly, but acknowledge the dark and twisty undercurrrents of life. It is still a musical so there is more light than shade, and I ended up coming out on that high you get from seeing a great story very well done... well, I get a high from that, anyway.

Having spent the last week in Oxford discussing, among other things, staging, dialogue, use of the body in conveying meaning, pauses, blocking, interpretation (etc etc ... and on, and on....) I was watching these things with a semi-critical eye and I still loved it. Silence and pauses were used to great effect, (rare in a musical) and the delivery of dialogue, whether in prose or in song, was very well done. Not necessarily the greatest singers in the world, but I understand a number of these songs were written with that in mind, so it would seem that Sondheim was more concerned with acting ability in some characters. There is an opening song where three characters sing individual pieces and merges into a three part harmony about 'now,' 'soon,' 'later': beautiful harmonies and the lyrics layer each other and add depth to each other.

You can tell I enjoyed it because I have the urge to write about it! Another feature of ALNM is it has a kind of chorus; five characters who introduce, observe, comment from the sidelines in song. Interestingly, "Henry V" has a chorus, usually done as one person. We attempted to see it in Oxford but only saw the first act and a half before a rain delay. The director had divided the chorus into four parts, which didn't work well as they were trying to establish seperate characters from something written for one. Watching ALNM, I could see how it could have been done; how these five people worked together as a group character, but still had identities and just-hinted-at back stories which wove throughout the main drama.

I appreciated both Sondheim's words and music (which I will be finding for my iPod) and in this particular production (a smaller one) I also appreciated the direction and acting. A minimalist set, but it was used well and a number of props filled it out, so it wasn't bare bones. The odd bit of singing let them down a little, but for me this was outweighed by the excellence of everything else.
Update from missjane at 9:28 am 3 comments:

Email ThisBlogThis!Share to TwitterShare to FacebookShare to Pinterest
Labels: travel 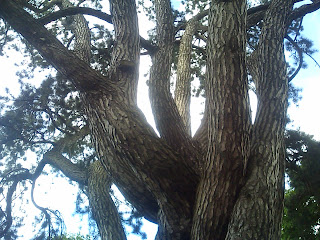 in the Botanic Gardens, sitting under Tolkien's favourite tree... a beautiful spot, and I can hear the wind sighing in its branches. An old twisted tree I can imagine talking v e r y s l o w l y...
Update from missjane at 1:36 am 1 comment:

I went to Wonderland today... 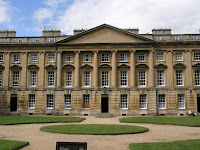 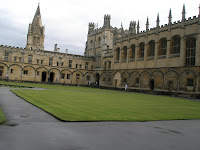 Well, the garden that served as part of the inspiration for 'Alice in Wonderland.' Today I did a tour of Christ Church, the college in which I am staying. It has a rich and varied history, including the connections with Alice - I saw the little door, the Cheshire Cat's tree and a most marvellous gnarled old tree which our guide believes partly inspired the Jabberwocky. Sadly, I did not have my camera with me, but I am doing the garden and meadow tour tomorrow, so will remember it then.

I am really, really enjoying my time here; I'd like to say "I love Oxford" but apart from a couple of pubs and a walking tour yesterday, I have mostly been in Christ Church so I should really say "I love Christ Church." The Oxford Experience (the official name of the summer school) is great. There are a range of people here - lots of people from the US, lots of retirees - but my new drinking buddies include a NY state attorney and a retired BHP exec who lives in Queensland. What we have in common is that we're all interested in *stuff* and quite happy to talk about anything and everything, and also quite happy to give our opinions! We have really interesting discussions over lunch and dinner about all topics under the sun, although as we all get into our courses, I think we are getting a little more focussed on our pet subjects. Loving my Shakespeare group; we have some *hilarious* times, particularly where people who haven't necessarily studied Shakespeare before start to appreciate how down to earth he really was... i.e. we explain how many dirty jokes there are in the text. We're going to see Henry V tonight and spent some time on it today; we read bits of it aloud and do various exercises to bring it alive in different ways.

Also Christ Church is just a beautiful setting; I've put up a couple of pictures which don't really capture it - one is crooked for starters! The crooked one is Tom Quad, which is where we enter and leave the college. The other is the main wing of Pec, where I'm staying, although in the left wing. For all its external grandeur, inside it is very much college accommodation.

My favourite, favourite experience so far has been coming 'home' after a night out. (See pubs aforementioned!) The main gates are shut, but there is a tiny, ancient wooden door set into them, for which we have a key. The first night we came in with the very last dregs of sunlight (sunset is around 10pm-ish), and last night there was a little moonlight. The door closes behind us and we come out into the quad, the buildings lit by moonlight with clouds rushing behind them. It's quiet, the quad is deserted, the moon is out, the last rays of the setting sun are lighting the clouds behind the spire, the stone is glowing slightly... it is an absolutely magic moment.

Both nights I've stopped and looked at it, and thought, well, even if rest of the trip is terrible, and despite Australia bloody not winning on Sunday, the whole thing was worth it for this. We'd better win at Lords, though, it's one of the few trump cards I've been able to play against the various Englishmen I've been discussing cricket with.

So, all in all, awesome so far and it is only Tuesday... a week is not enough, really. There are various people here who come for two or three or even all five weeks, and a very large number of people who come every year, or as often as they can. They are mostly from Europe or the US though.

All the non-Harry Potter fans can leave now - one of the things they do love telling you about here is which bits of Harry Potter were filmed where. Interestingly, the dining hall, which was a major inspiration for the dining hall in the films, did not actually have any filming in it. This is because they were here during term and the students needed to eat! The other interesting thing is how many of the people here for the course love Harry Potter. There are a few anti-Harry snobs, but the vast majority of people I've spoken to love it. I seem to be a in a very small minority who enjoy it but don't love it. Various bits of Tom Quad and the dining hall staircase were used in the films, and I have to say it does all feel slightly familiar. I think this is also due to it being from a similar period to bits of Bath, and no doubt inspiration for various other fantasy / medieval epics and the setting for about 800 films.
Update from missjane at 1:35 am No comments:

is a bit like my house: quirky, rundown, contains an eclectic assortment of odds and ends, gets tidied up when I have visitors, and only receives attention in brief (but energetic) spurts.